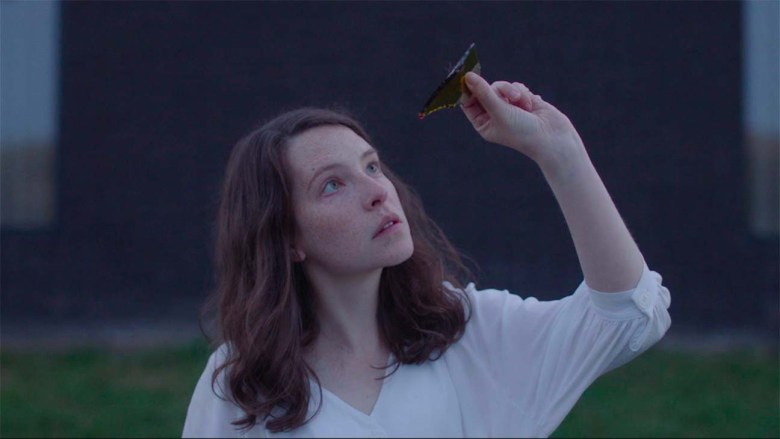 A strange girl shows up to cook a loose dinner for a wealthy family in a horror film debut that spares no sympathy for their dinner.

Taking “eat the rich” to literal extremes Luis Buñuel had only dreamed of (and lamented the omission of “The Exterminating Angel”), Lee Haven Jones’ “The Feast” is a horror game in Welsh if little subtle about his class allegory that he might as well pre-chew human flesh as he ends up introducing birds into your mouth. Anyone who is disgusted by this visual should probably avoid the film itself, as this juicy but somewhat undercooked debut feature certainly does a lot of good to its title by the time dessert is served. Of course, the rest of you sick people have swallowed enough juice over the years to know that a certain degree of obviousness can be a good thing when it comes to certain dishes, just like it. can be for some meals; after all, isn’t the fun of eating a cheeseburger that every bite reminds you that you are eating a cheeseburger? That it frees your mind to enjoy the ketchup?

If “The Feast” is a bit more fancy and less satisfying than fast food comparisons suggest, the fact remains that the meat buffet from a Jones movie only works so well because he spares no real sympathy for his dinner. It’s a story about Cadi (Annes Elwy), a strange young woman with wet dark hair who is hired to organize a dinner party for the worst family in Wales, and we know from the moment she arrives at their future home ” Parasite “- its cold modernism all the more garish when it is surrounded by lush green countryside – that the people who live there deserve everything that happens to them.

The Patriarch (Julian Lewis Jones as Gwyn) is a corrupt MP who made his fortune selling Wales history to the highest bidder and drilling his land to death for profit. His wife Glenda (a nuanced and sleek Nia Roberts, sporting tremendous ‘The True Housewives of Swansea’ energy) welcomes help into their home with all the jagged grace of someone who needs her visitors to know how much this is. cost ; the implication that Glenda dug up her roots when she got married in such a gaudy is tastefully underestimated, even though Roger Williams’ script would have done well to focus on the tug-of-war around her soul . This lovely couple also have two big adult duds. One is a serial killer-like nutcase inclined to carry unitards (Sion Alun Davies as Gweirydd) around the house. The other is a recovering heroin addict named Guto (Steffan Cennydd), whose continued existence puts the rest of his clan to shame, and whose obvious hatred for everyone makes him the closest thing to his family for a sympathetic figure.

Nonetheless, the film’s allegiance remains with the soft-spoken Cadi, who sees these people for their moral rot almost “Princess Mononoke” – rot symbolized by everything from skinned rabbits and modern art to a scene from Gweirydd. shaving his balls – and seems to get physically sickened as the evening wears on. She was hired to cook a dinner at which Gwyn hopes to make wine and dine to a neighbor to sell the family land along with the newly discovered mineral deposits below. By the time we see Cadi ram the pieces of a shattered glass bottle into her vagina to keep them safe, it’s clear someone probably should have checked her credentials.

“The Feast” begins to skewer Glenda’s brood from practically the minute it begins, retracing the empty family wealth with the kind of cheeky body horror tropes that movies like “The Neon Demon” and “Death” do. Becomes Her “got on with more poise (so when it comes to movies, facial peels and raw diets remain among the ultimate expressions of modern evil). Mute and servile when others can see her, Cadi does no good whenever she is out of sight. She whispers to the art on the wall, smears dirt on the sheets, and tries on Glenda’s earrings with a demented sneer; she empathizes with the rabbits Gwyn kills for the main course.

There is little mystery as to why the meal is so rushed, just as there is little intrigue behind what Cadi might have to do with it, but Lee’s stainless steel steering keeps us ready for it. all the mess to come. Invariably composed of classical music, each of Lee’s dolly push-ins echoes the promise of carnage. Each black outfit is offset by a white surface, and each white surface is begging to be covered in blood. “The Feast” is never scary, but it’s a film that prefers its audience to lick their lips rather than hide their eyes.

It still feels like a choice and not a failure, though Lee could have stepped in with even more conviction. It would have been easy to tell this story from Guto’s point of view, sprinkle it with scares (there are hardly any), and allow his encounter with the old strength of the film to help him see the error in his family’s manners. Instead, “The Feast” takes the road less traveled, identifying uniquely with Cadi long before telling us who or what she is. If we are afraid, it is not so much for her as for everyone.

As a result, it becomes less of a mainstream horror film and more of a revenge fantasy in disguise – one hungry for a Pyrrhic victory over those who would cannibalize their own land and history for a few dollars more. And there’s no shortage of sick fun, especially once it all comes together and Lee begins conducting a dizzying schadenfreude symphony (complete with maggots to spare). But “The Feast” is too busy indulging himself to reckon with the inevitable food coma it foreshadows. Glenda’s family may not be long for this world, but people like them have already gotten so much out of it that even the cinematic justice they receive here seems inadequate. “After taking everything,” someone asks, “what will be left? Lee acknowledges the lingering sadness of the script he’s playing here, but the “whole” touched upon in his film remains too vague for us to appreciate what his revenge might accomplish. Despite his refined palate and touches of local flavor, “The Feast” remains empty calories – haunting only for the way he seems to admit it in the very last shot.

IFC Midnight will release “The Feast” in theaters and on VOD on Friday, November 19th.