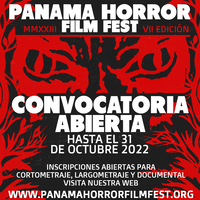 Our friends at the Panama Horror Film Fest are gearing up for another edition of their fabulous popular event. The only event of its kind in the country, we truly appreciate the dynamic spirit of these local champions of international horror cinema.

The festival has opened its FilmFreeway platform for submissions, so if you’re looking for a LatAm notch in your festival circuit, consider submitting your film to the Panama Horror Film Fest.

We are closer to celebrating the seventh edition of the Panama Horror Film Fest. The only horror film festival in the country, a film festival where all kinds of horror films are welcome, even fantasy films as long as they are dark.

Our festival is celebrated in person in the center of America, in the city of Panama.

The films we screen are generally independent, mainly from Latin America, but we have also screened films from Asia, Africa, Europe, Oceania and North America. All horror movies are welcome as long as they are not released in commercial theaters in Panama or on any online platform in our territory.

We are looking for recent films (3 years since the premiere) although there is always room to screen a good horror classic or a cult film.

Our public is thirsty for stories that are out of the ordinary, they are looking for risky proposals, they want to scare themselves but they do not hesitate to laugh in front of bloody or unfortunately comic scenes.

We want you to be part of our lineup!!