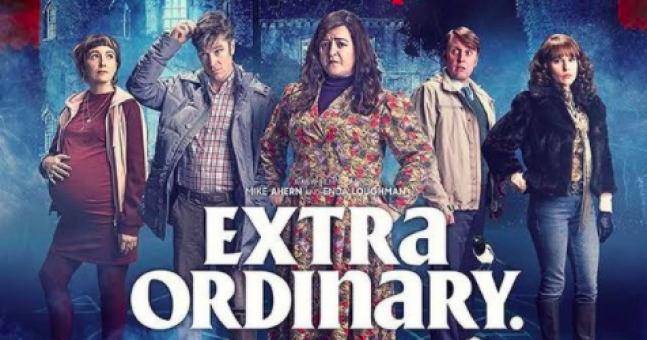 If you haven’t seen the Irish comedy / horror film Extra Ordinary when it is released in 2019, now is a great time to give it a watch. With the spooky season upon us, this is the perfect snuggle up movie for anyone who wants to get into the Halloween spirit, but can’t deal with the trauma of a full-blown horror movie. It’s the perfect balance of scary and gas, with Maeve Higgins’ dry, inimitable spirit leading us through the bizarre world of driving lessons and satanic pacts.

Second, huge news. Blinder Films, the production company behind Extra Ordinary today confirmed that comedy legends Maya Rudolph (SNL, Bridesmaids) and Natasha Lyonne (Russian doll, all teen movies of all time) will adapt the horror feature for TV! Extra Ordinary writer and star Maeve Higgins has been killing comedy acting in America for a decade, so it was only a matter of time before something huge like this happened, but anyway, what a buzz.

Incredibly excited to be working with Animal on @team_daddy‘s EXTRA ORDINARY as a comedy series for @TBSNetwork! ??

According to Deadline the film will be adapted into a 30-minute comedy series for TBS, the project being developed by Animal Pictures (a production company run by Rudolph, Lyonne and Danielle Renfrew Behrens). Blinder Films’ Katie Holly and Yvonne Donohoe, the team behind the original film, will also be part of the production team.

Take a look at the Extra Ordinary trailer below, and if you’re in the mood for your horror movie of the week, you can rent it on Youtube for € 2.99. I can’t argue with these prices, girls.

READ NEXT: Six of the best movies on TV for your Wednesday night at