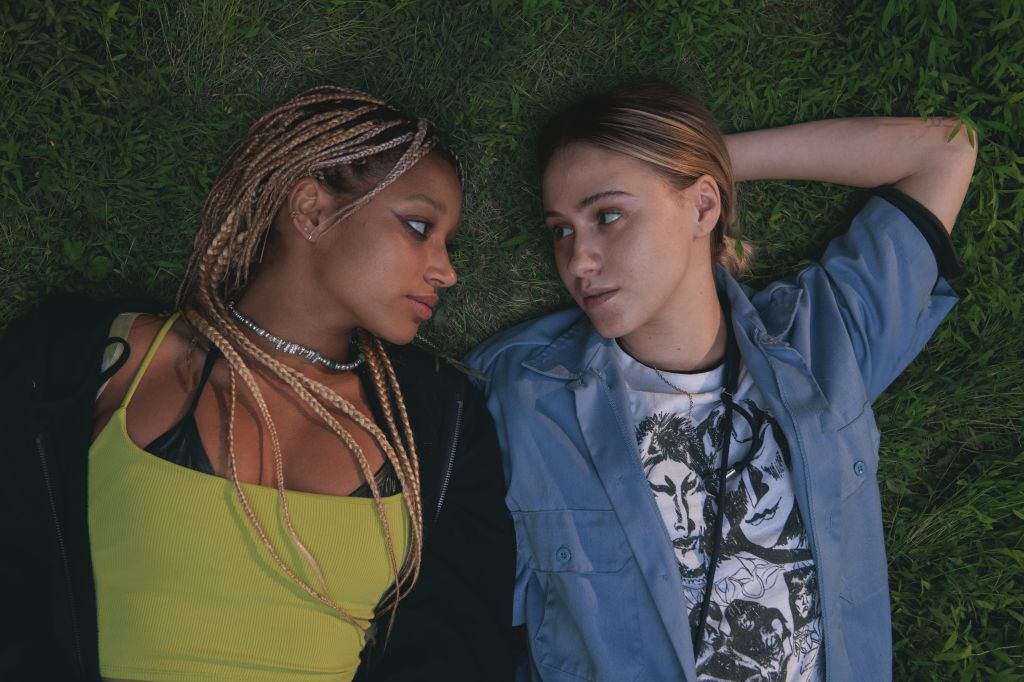 Although they both had impressive filmographies at a young age, neither Maria Bakalova nor Amandla Stenberg had appeared in a horror movie before. That all changes with the August 5 release of “Bodies Bodies Bodies,” a clever and funny slasher flick from A24 in which a group of enemy friends find themselves falling one by one while trapped in a secluded mansion during a storm. An Agatha Christie-style murder mystery set among Generation Z, the characters in Halina Reijn’s first American film must try to look up from their phones long enough to figure out who’s killing.

Bakalova and Stenberg star as Bee and Sophie, a fairly new couple with a noticeable class divide — working-class Bee doesn’t quite fit Sophie’s spoiled, empowered crowd. Variety spoke to the actors about taking on the medium of horror, scary movies as “exposure therapy” and working with a cast that includes Pete Davidson.

This is the first horror movie for each of you. Is it a genre you like?

Maria Bakalova: I like the A24 genre because they are so visually beautiful. It’s not only [screaming sounds] and knives and blood. You get a nice picture of something happening in a strange place.

Amandla Stenberg: Likewise, I’m a huge fan of the horror movies released by A24 because I feel like they’re deeply psychological and dramatic, layered and meaningful. When I saw it was A24 I was so excited. I also like when the medium is used to comment, especially in a satirical way. And that’s what Sarah DeLappe’s script had – she’s so bright and smart and she did something really emotionally deep that was also hilarious and realistic and contemporary.

What are some of your favorite horror movies?

Bakalova: “It follows”, “Hereditary”, “Midsommar”. I’ll stick to these three.

Stenberg: “Hereditary” is my favorite contemporary horror film. I’ve been a lifelong fan of “The Shining” and “Carrie.” I also like “Rosemary’s Baby”. And I recently watched a Mexican movie that came out of the Tribeca Film Festival called “Huesera,” which was one of my favorite horror movies.

Why do you think we love horror movies and be scared?

Stenberg: I feel like being afraid in a controlled environment almost absolves us of the fear we have when we’re not in a controlled environment. Some of the deepest feelings we can experience as human beings are love, passion, and fear. Often we reach the deepest parts of ourselves in our own psyche when we expose ourselves to these feelings. I feel like horror movies can almost be like exposure therapy.

Bakalova: I love the challenge – if you look at the screen and will you close your eyes or not. It’s like: do I dare to see what’s going to happen? Can I guess what will happen?

I love horror movies but I’m not the kind of person who wants to encounter those things in real life. Would you spend the night in a haunted house or go to a seance? Are any of you interested in this?

Stenberg: I’m great at it. (Laughs) No, there are things I don’t want to mess with, like sessions. Certain energy fields that I don’t want to tap into or invite into my life. But I think it’s hilarious and beautiful that human beings make art in the first place and it’s important for us to expose ourselves to fear. It’s kind of endearing to us as a species that we feel like we have to engage with those scary or bad feelings in order to balance our experience.

Bakalova: I’m pretty much the same. I get scared easily, I have a lot of fears. But if I have the opportunity to try something, I think I will try it! I will regret it later. But I will try.

I only recently learned that your director of “Bodies Bodies Bodies” Halina Reijn is also an actor. What’s it like working with a filmmaker who has solid acting experience?

Stenberg: What was really special about Halina’s directing style was that she came from a theater background. And so the way she approached doing the movie with us was like directing a play. Blocking was therefore very important, the environment in which we were working [was] super important. And she always made sure we felt like we had a safe space in which we could move, play and react. Often the camera would walk around and we just existed in that space. And our amazing DP Jasper Wolf on camera was kind of like another character who was also engaging in that blocking with us.

You go through a lot, but you work with this amazing cast in a remote location – was it fun?

Stenberg: It was really fun. It was as twisted and fun as the tone of the film. In some ways it was deeply traumatic. And it was also a riot. Because these characters are so hilarious. And we are definitely all bound by trauma. We were brought together in these very special circumstances.

It’s very funny – especially the Pete Davidson character. Was it ever hard not to laugh during takes?

Stenberg: I think we did a good job of not breaking it because we approached it thinking that if we want to laugh, our characters want to laugh. The point of our characters is that they don’t face the circumstances. Or they treat it with humor, with sarcasm, with a deviation. Pete never broke. I was a little amazed at how unafraid he was of portraying this absolute asshole. Comedians are fantastic because they’re not afraid of being seen in a bad light or leaning into the darker and therefore funniest part of themselves. And so I feel like we all kind of took notice of him in terms of having no fear around him and turning the character into someone who was absolutely terrifying how awful they were.

Bakalova: Yes, he transformed immediately. He’s one of the nicest people I’ve personally met and seeing him be that person is like, “How do you even do that?” He was super disciplined, which made me appreciate him as an actor and an artist.

The film takes a few shots of people obsessed with social media. did it change your relationship with him?

Stenberg: I don’t know if it changed him. I’ve always had a sort of adversarial relationship with social media and the place it has in our lives. That’s why I was really drawn to the script, because I felt like it very articulately addressed the importance of the role of social media in our interpersonal lives, our relationships, our social lives now . So I don’t know, I think probably the funniest part of making this movie was when we weren’t riding, half the time, we were probably on our phones.

Bakalova: Unfortunately, I don’t think the movie changed my relationship with social media. I’m not glued to my phone, but it’s the first thing I look at when I open my eyes. And it’s the last thing I look at before I fall asleep. This is the reality we live in, unfortunately. And as long as you realize that, I don’t think you’re going to have as many problems as our characters.