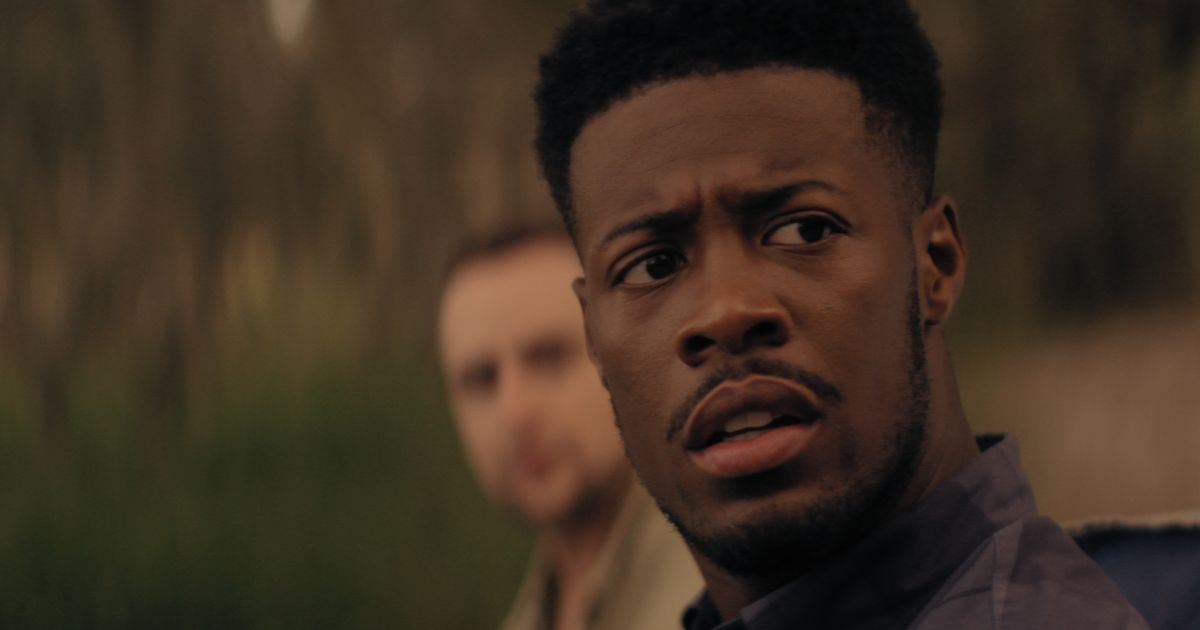 “The Curse of the Patasola” hits theaters in select markets (including Atlanta, at Marietta’s Studio Movie Grill) on January 21. It will also be available on demand from the same day on many platforms, including iTunes, Amazon Prime Video and Google. Play, as well as through various cable and streaming outlets.

We recently reached out to AJ and Gillie Jones to chat about their labor of love.

ArtsATL: Can you give us a brief summary of this breathtaking film?

AJ: Two troubled couples go camping for the weekend to try to reconnect. Around the campfire on the first evening, Naomi tells the group her family’s legend of a creature called La Patasola, a one-legged woman who haunts the forest, searching for men who have been unfaithful to their wives. The group soon find themselves fighting for their lives against the ancient Amazon beast.

ArtsATL: Tell us about the Latin and folk origins of La Patasola.

AJ: La Patasola, which means one-legged woman, is a South American legend. There are many variations of the legend of La Patasola. Some believe she is a beautiful woman who cheated on her husband, so he murdered their children and cut off her leg, causing her tortured soul to wander the jungle in search of prey. Some think she is a beautiful seductress in a white dress who sucks your blood like a vampire. Others think she’s more of a goblin-like creature, with bulging eyes, a big nose, and a breast, while others think she’s a one-hoofed monstrous creature you’d expect from a HP Lovecraft story. 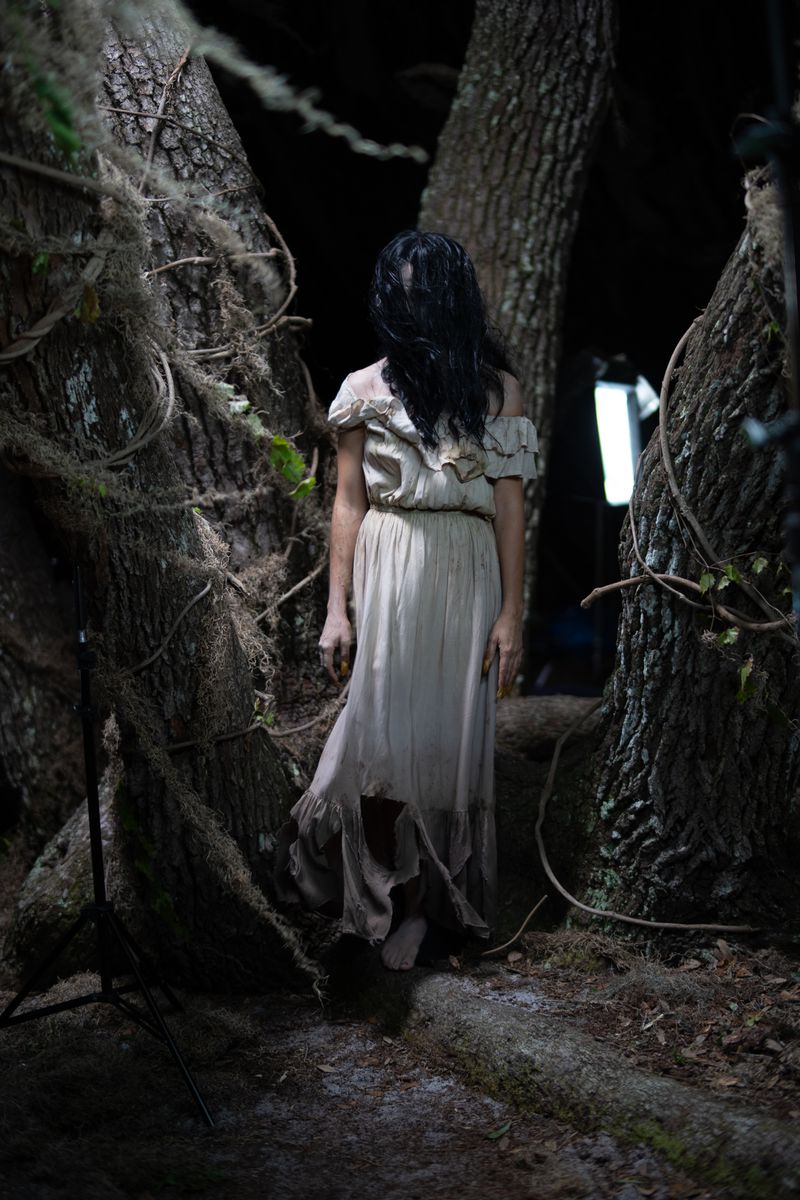 Most legends agree that once she kills a victim, she sings a hauntingly beautiful song that echoes through the jungle. I encourage anyone who has friends of South American descent to ask them about the Patasola and see what version of the legend they were able to pass on to them.

ArtsATL: Bad things always happen to lusty couples in the woods garlanded with Spanish moss. How does your film differ from other horror films?

AJ: I feel like modern horror movies are mostly about setups and alarm jumps, rather than focusing on characters and story. I love that ours is an authentic story of two couples who are having very real difficulties in their relationships. We really spend time with them and learn their dynamics, which makes the payoff of trying to escape the true form of the Patasola all the more important.

Speaking of which, I couldn’t be prouder of the creature we created for the film’s finale. It’s so easy for movies to create all-CGI creatures, so the team at (Doraville manufacturing and design studio) Hex Mortis and I dedicated ourselves to creating a hands-on monster with a stuntman playing the game. inside to create a much more authentic thrill. Plus, Kelsey Woods’ score adds so much depth and mood to the film, and Yvette Gonzalez-Nacer’s original opening theme is hauntingly beautiful. It really helps the movie stand out as a one-of-a-kind creature feature.

Gillie: Hex Mortis worked on ‘Walking Dead’, ‘Vampire Diaries’ and tons of movies. The only reason we got them to work on “The Curse of La Patasola” is because they had no work when COVID shut things down in 2020.

ArtsATL: How did you start in show business?

AJ: I was born in Houston, but grew up in central Florida. I was a baseball player who stumbled upon an acting class in college, which turned into a show in my first play. I got hooked right away and ended my baseball career to return to Orlando to start a career in acting. I moved to Atlanta for more film and TV opportunities in 2016 and found work early on. I had been writing screenplays all the time, learning and developing my skills, and continued in Atlanta. Owning the Nova House business in Atlanta has allowed me to work on a range of skills from administration, to filming and video editing, to directing actors in recorded auditions. I would consider my film education to be very DIY and hands-on learning. The “No Film School” method.

Gillie: I’m a Pittsburgh girl all the way – Go Steelers! I was first captivated by the storytelling after my parents took me to see the national tour of “Les Miserables” when I was 7 years old. While I had been dancing since I was 3, seeing the musical helped me fall in love with acting, and my parents let me add singing lessons and acting lessons in addition to dancing. My first experience in the professional world was as a pre-teen in the Civic Light Opera productions of “The Wizard of Oz” and “Annie”.

After high school, I attended the University of Delaware where I majored in communications and fell in love with the production aspects of the industry. . . . My first job in the industry was with Wayne Brady. While working as an assistant, he gave me life-changing advice that set me on the path to pursuing my true passion, acting: honing my natural talent and gaining all the experience I could in front of a live audience. I started working for American Immersion Theater (which provides entertainment for parties and events across the United States). . . . I was quickly promoted to National Regional Manager and became a top performer for the company. For over five years, I’ve played a wide variety of characters and improvised in front of thousands of spectators. Additionally, I helped develop the training program for the company and managed their national inventory.

It helped me realize that to be truly happy, I needed to bring my type A production brain and my creative side to work together. That’s why I love owning my own production company, Renegade Creative, because I can enjoy all aspects of cinema being in front of and behind the camera.

ArtsATL: With “The Curse of La Patasola” having its Atlanta premiere this week and now nearing release, what do you think of your prospects in the film industry in Atlanta?

Candice Dyer’s work has appeared in Atlanta Magazine, Garden and Gun, Georgia Trend, and other publications. She is the author of Street singers, Soul Shakers, Rebels with a Cause: the music of Macon.

Working closely with the American Press Institute, The Atlanta Journal-Constitution is embarking on an experiment to identify, nurture, and expand a network of news partnerships in Metro Atlanta and across the state.

Our new partner, ArtsATL (www.artsatl.org), is a non-profit organization that plays a vital role in educating and informing the public about the arts and culture of the metro Atlanta area. Founded in 2009, ArtsATL’s goal is to help build a sustainable arts community contributing to the economic and cultural health of the city.

Over the next few weeks we will be introducing other partners and would love to hear your feedback.

You can contact Editor-in-Chief Mark A. Waligore by email at [email protected].