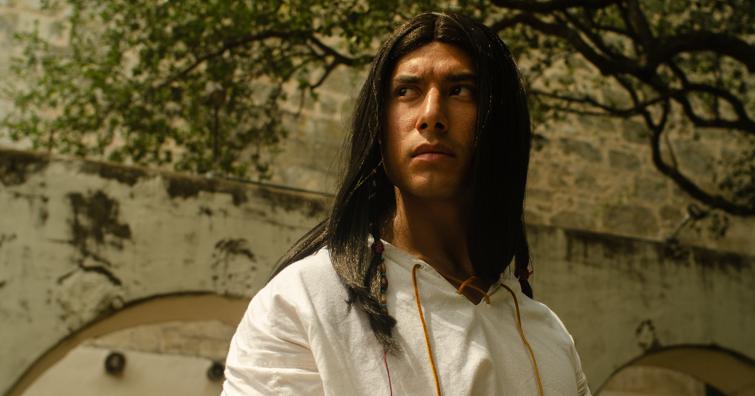 A horror film shot in San Antonio will close the CineFestival

“People had made comments that it would be nice to know a little more about the supernatural elements, and I was like, OK, I’ll see what I can do about that,” said Zuniga, 39. year. it got pretty interesting, and it became the storyline for “Cuerpo.”

“Cuerpo,” which Zuniga says falls loosely within the horror genre, will wrap up the 43rd edition of CineFestival at 7:30 p.m. Sunday. The Guadalupe Cultural Arts Center’s annual festival runs from today through Sunday.

Filmed entirely in San Antonio, “Cuerpo” is set in and around an 18th century South Texas mission.

“I like to say it’s more of a drama exploring the relationships and clashes between the Spanish settlers, the monks trying to set up the missions, and the local natives,” Zuniga said. “So there’s the main conflict being ownership of land and who really owns it, and the horror element being that there’s already something there that they unknowingly discovered that is now awake.”

The film comes to a bloody, open-ended conclusion that sets up the sequel Zuniga has already written.

One of his goals was to create a gothic tale away from the kind of real estate typically associated with the genre.

“It’s the new world; there is no haunted castle,” he said. “The idea was that this is the origin of a South Texas gothic story, the event where these horror stories come from, or these warning stories that you would tell children.”

This is the second CineFestival organized by Eugenio del Bosque Gómez. Its aim was once again to emphasize local and regional filmmakers, a framework that had been established by Cristina Ballí, executive director of Guadalupe, several years before del Bosque Gómez became director of the festival.

“It was time for a makeover, and I think she had a really good idea,” he said. “She changed it for this Texas focus. We keep that focus, and I also like to curate a program that includes films from other places made by Latino or indigenous filmmakers and sprinkle it with a bit of international films.

There are a few firsts in the festival. But that has become less important as digital debuts become more common, del Bosque Gómez said.

“Because things come online so quickly, one of the things I’ve done with the program is not worry too much about premiere status,” he said. “We include films from the past two years.”

2021 films in the mix include “Jockey,” which generated buzz for Clifton Collins Jr.’s portrayal of an aging jockey forced to confront the punishing toll his profession has taken on his body; and “Madres”, which was co-written by San Antonian Marcella Ochoa and is about a pregnant woman who experiences strange symptoms and visions after she and her husband move to a migrant farming community in California.

Tickets: All-access passes are $40. Admission to most individual screenings is $8, although a few are free. Tickets available at guadalupeculturalarts.org.

Free movies: These screenings throughout the festival are free: a family program including “Ainbo: Spirit of the Amazon” and “Carlitos Chupacabra”, Thursday noon; screenings of international short films at 2 p.m. from Thursday to Friday; American shorts at 4 p.m. Thursday through Friday; Texas Shorts at noon Friday and Sunday; short films by young filmmakers at 10 a.m. on Saturdays; and “Madres” at 6 p.m. Friday. Plus, the Mezquite Awards ceremony at 6:30 p.m. Sunday is free.

Made in South Africa

“Dream Carriers”: Esmeralda Hernandez’s short film tells the story of a Chicana on her way to college who makes one last lap around her neighborhood. Noon Saturday as part of an eight-film showcase in San Antonio.

“Lilith”: In this horror short from Danny Geraldo Martinez, part of this year’s official selection of Texas Frightmare Weekend, a promiscuous gentleman meets the Queen of Hell. 2 p.m. Saturday

“Cuerpo”: The latest film was shot in San Antonio by writer/director Mark Zuniga and is a gothic horror story in which a dispute over land ownership takes a supernatural turn. 7:30 p.m. Sunday.

“Pepe Serna: life is an art”: Director Luis Reyes’ documentary explores the career of Serna, a Corpus Christi native who has appeared in more than 100 films, including “Scarface,” “American Me,” “Silverado,” and “Red Dawn.” 7 p.m. today.

“Comal:” Gian Cassini’s documentary follows his quest to try to get to know his late father, a hitman and drug dealer who left Cassini and his mother when he was a child. 8 p.m. Friday.

“Jockey”: Clifton Collins Jr. plays an aging jockey trying to figure out what’s next as his body begins to break down, making it clear that he won’t be able to ride for much longer. Directed by Clint Bentley. 4 p.m. Saturday.

“An awesome action movie”: This Mexican comedy directed by Luis Antonio Rodriguez tells the story of two aspiring filmmakers who kidnap a famous actor (Héctor Soberón), with the intention of using the ransom to finance their film. It gets more complicated when they find out he’s broke. 9 p.m. Saturday.

“What we leave behind:” Filmmaker Iliana Sosa’s documentary captures his grandfather’s construction of a house in rural Mexico, something that fills his time after he is no longer physically able to cross the border to El Paso to visit to his family as he had done every month for years. 4:30 p.m. Sunday.

See the full program at guadalupeculturalarts.org.

Regardless of when a film is released, one of the most important things the festival offers filmmakers and audiences alike is the opportunity to see films on the big screen with other people.

“The energy of theater is something that exists and is real,” said del Bosque Gómez. “The Guadalupe Theater has its own energy when it’s empty, but when you fill it up and show a movie or put on a performance, it really comes alive.”

“Cuerpo” is one of the films premiering at the festival. Del Bosque Gómez said he was impressed with the ambition of the project as well as the way it showcases the talents of Zuniga, its cast and crew.

“It’s a genre film, it’s a period piece – all of those things are very difficult to pull off,” he said. “We think it deserves a special place in the program.”

Zuniga has directed a number of short films and worked on feature film projects. “Cuerpo” is the first feature film that he directs alone. It means a lot to him that he has been chosen for the festival and that he has such an important place in the program.

“I can’t think of a better place to premiere than San Antonio and CineFestival,” said Zuniga, who was born and raised in Mercedes. “I think it’s a perfect fit.”

Sunday’s screening will be his first opportunity to watch it with an audience.

“It’s exciting and nerve-wracking,” he said. “You never know how they will react. Will they take advantage of it, giving you confusing looks? Is it going to be completely silent and maybe you’ll get applause too bad? I am very curious to see.